We are thrilled to announce that Marsden Woo Gallery artist Nao Matsunaga has been awarded the £10,000 British Ceramics Biennial AWARD in acknowledgment of his outstanding creativity in contemporary ceramics. Congratulations, Nao!

‘Nao Matsunaga is an artist with a strong body of work behind him that indicates further fascinating development as he challenges the properties of clay and its relationship with the world. The selectors recognised this delicate position in his professional career and the impetus the Award prize could make,’ stated BCB Co-Director Jeremy Theophilus.


To read more about the British Ceramics Biennial awards have a look at their webpage: http://www.britishceramicsbiennial.com/about/news/awards-winners-announced/
Please see images below of Matsunaga’s previous shows at Marsden Woo Gallery over the past couple of years. For further information about the artist, visit our website: http://www.marsdenwoo.com/matsunaga/nm5.htm

The dancer approaches and embeds herself within her audience her arm covered loosely with gold leaf seemingly diseasing the skin.
The gold is displaced, passed on, pressed into the skin – a kind of burn.  Meanwhile, in the distance another performer absorbs the attention around her through subtle gestures and invitation …

Following an outstanding success with audiences around the country, Angela Woodhouse and Jerwood award winning Marsden Woo Gallery artist Caroline Broadhead bring this intriguing and beautiful performance installation Between back to London. The performances will be held at The Platform Theatre, Central Saint Martins on 6 & 7 November.

Sharing the space with the performers you are witness to visual gems set against intimate exchanges in this highly charged and atmospheric work. Made in collaboration with exceptional performers Stine Nilsen (Co – artistic director Candoco Dance Co), David McCormick (Richard Alston/DV8) and Italian dancer Martina Conti (Firenza Guidi) this promises to be a memorable event.

Angela and Caroline’s combined interests explore detail and intimacy through the interplay of movement, materials and light. Significant works such as Court (2003-6) and the Place Prize Commission Threshold (2004) have been followed by profiled commissions including Sighted (Royal Opera House Deloitte Ignite 2009) and The Maven commission 2010 for Woking Dance Festival in collaboration with Tate Artist Rooms (Jenny Holzer).
Between has been touring since 2011 and this will be the last chance to catch this extraordinary work. 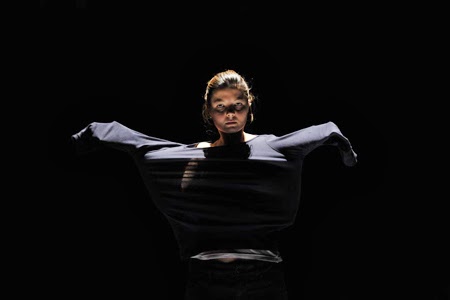 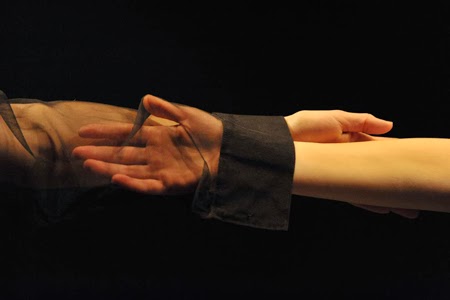 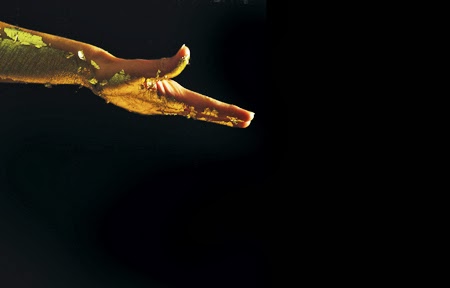 Curated by Sarah Griffin for Sotheby’s, Chatsworth House is currently home to Modern Makers - a selling exhibition featuring work by some of the UK’s most celebrated craftspeople. 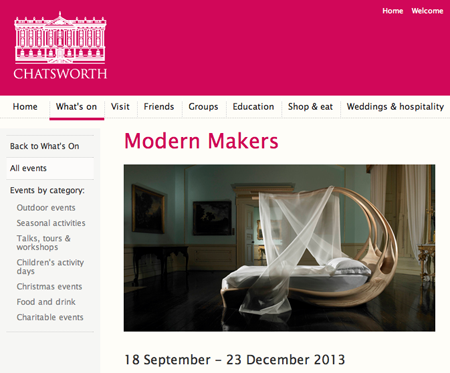 The latest instalment of our artist discussion series on Tuesday evening was sadly the last with our host Glenn Adamson, who is leaving London to take up his position as the newly-appointed Director of the Museum of Art and Design in New York. We are sorry to see Glenn go as he has provided us with tremendous insights into our gallery shows over the years and wish him the very best in his exciting new role.

It was certainly a discussion to remember. Our main gallery exhibitor Dawn Youll spoke about her new body of work and the influences and techniques involved, with some fantastic communication from the audience. Her show ‘Locale’ is a response to her new environment of Knightswood in Glasgow but also to the rituals, rhythms and functions that happen in any urban environment. She explained that she looks at an object as a pattern of a lifestyle, how routines are established and plays with those perceptions. And as Adamson remarked, in doing so, she creates an imaginary landscape on the gallery plinth. An audience member questioned whether there was a commentary within her work about British suburbia, to which Youll agreed there was – an underlying climate of UK/worldwide suburbia as well as the tiny issues that take place behind closed doors.

After Adamson commented on the influence of Richard Slee in her work, Slee- who was in attendance- piped up from the audience to say, “she influenced me”, and admired Youll’s remarkable way with texture and colour.

Youll went on to speak about the scale of her work and her love of the ceramic slip-cast tradition. Richard Slee once more spoke from the audience regarding the ‘British sensibility of making something for an interior’ as Youll mentioned that the ornamental scale of her work is very important and that the ‘table-top’ size of her pieces is fully intentional. Youll finished by speaking about how much she enjoys the control she has in the slip-casting process and through the practice of glazing, can then control the display of each piece. 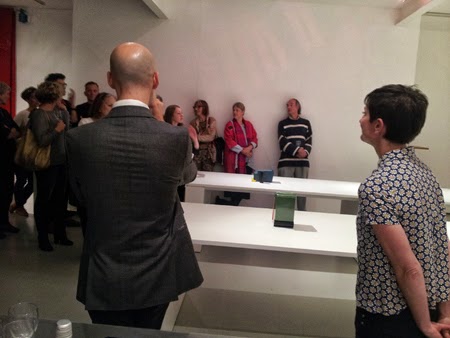 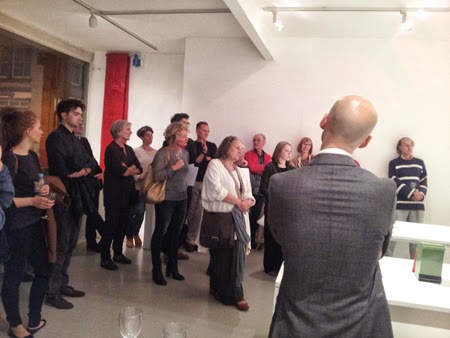 The discussion then moved down to James Thompson’s show ‘Expanding Spaces’ in the Project Space.

Thompson began by introducing himself and his work; speaking about the nine months he spent recording the features of a cell in a former psychiatric asylum (High Royds) in West Yorkshire. Thompson felt drawn to this area as he grew up close by and remarked that it had previously been ‘out-of-bounds’. Upon discovering that the compound was going to be developed into luxury apartments he felt inspired to record the asylum environment before it was gone forever.

Adamson commented on the execution of the work as Thompson had, while working there, inhabited the space like the previous inhabitants of the cell did and in doing so, created a real narrative charge within the exhibition. He also went on to praise the use of both analogue and digital processes in Thompson’s work and remarked that the multiplicity of media within the show (kinetic sculpture, casting, digital-sculpture, film) generates different sensations within the gallery space. Thompson took this point further by remarking that in harvesting different elements from the environment of the cell the work is anchored in a real relationship with the space. 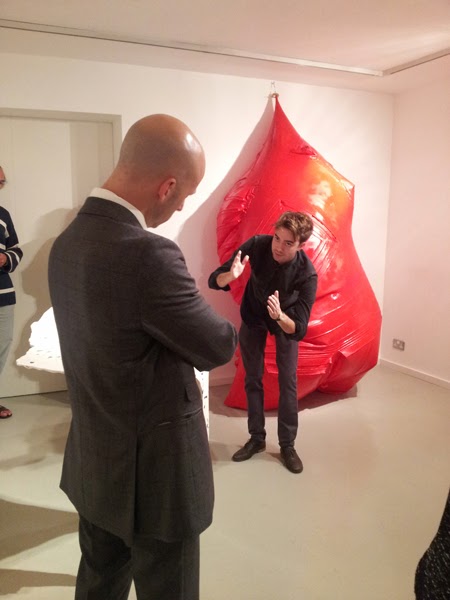 Marsden Woo Gallery artist Carol McNicoll asked if any former inhabitants of High Royds had seen the work. Thompson replied that no one had but it would make for a very interesting conversation if they did!

Thompson went on to discuss his background in product design, and as well as wishing to create a record of the cell before it was redeveloped, much of the work he has created for this show has an element of functionality and can act as furniture. ‘The space can have another function than the one it holds currently’, he concluded. 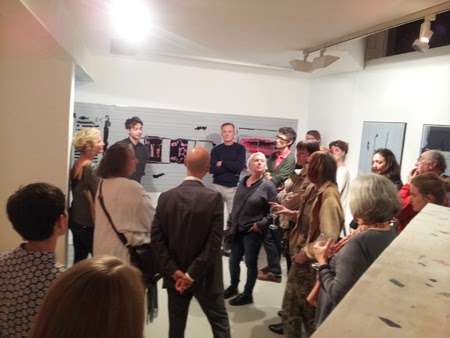 Once again, a huge thank you to Glenn Adamson, both artists and our fantastic audience for such an engaging and fascinating discussion!

For more information on our current shows and to view installation images, please see our previous blog post: http://marsdenwoo.blogspot.co.uk/2013/09/shows-now-on-dawn-youll-and-james.html Both shows run until 2 November 2013.

Congratulations to both artists!

Some installation images from Matsunaga's previous show with us in September/October 2012...

MARSDEN WOO GALLERY, 23 Charlotte Road, EC2A 3PB
Shoreditch, London, United Kingdom
MARSDEN WOO GALLERY shows innovative work in the applied arts from internationally recognised artists and talented newcomers. It is one of the largest spaces in London devoted to showing a broad range of applied artforms. Our main gallery is given over to a programme of solo and small group exhibitions featuring new work from gallery artists and specially invited guests. Further extensive collections of important work can be viewed by appointment.