The first works displayed at Marsden Woo Gallery by Kerry Jameson were from her 'Conflict' series in November 2009. Shortly after exhibiting this series she joined our stable of gallery artists along with Nao Matsunaga and Dawn Youll. Philip Sayer took these stunning pictures of the two main pieces 'The Advance' and 'The Battle'. The first image was used in a fantastic centre-spread feature in a-n magazine.
Alongside Nao and Dawn, Kerry is currently showing a substantial new 'body' of work (in more ways than one...!) in our current exhibition 'Introducing' which opened last night. The show runs until 30 April 2011.

Tom Foulsham's Project Space show is featured in a fantastic full page article, written by Chiara Alessi, on page 12 in the March 2011 issue of Domus magazine. 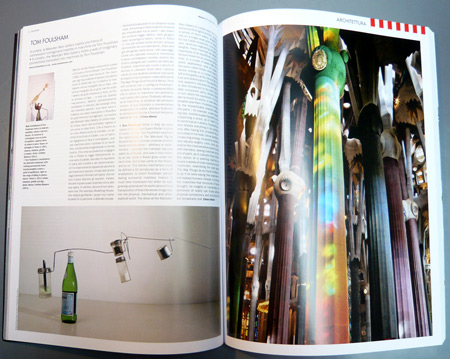 DAWN YOULL ON THE COVER OF CRAFTS MAGAZINE

The current issue of Crafts magazine is emblazoned with the vibrant work of Dawn Youll, the recipient of this year's Arts Foundation Award in Ceramics. The feature includes a stunning cover image of 'National Trust' (2010).

OUR CURRENT EXHIBITIONS ARE IN THEIR FINAL WEEK

'THE WIRE AND OTHER WORKS' - WORK IN PROGRESS BY STEPHENIE BERGMAN

These images show work in progress by Stephenie Bergman for her upcoming show, 'The Wire and Other Works' in our Project Space, 5 May - 18 June 2011.


Bergman will transform Marsden Woo Gallery’s Project Space into an extraordinary habitat furnished with bold and exotic artefacts, both functional and decorative. They include room dividers and lights, arrangements of boxes and ceramic boulders, tables and cups, all far from orthodox in form. The collection also comprises newly invented things, such as a playful sculptural object that serves as a shrine-like receptacle for a special pair of shoes.
A delight in the interplay of shape, line, colour and texture has been a feature of Bergman’s art and design work since she first came to prominence as a painter, in the 1970s. Since that time she has moved effortlessly between different media (canvas and paint, wood, clay and glaze), following her creative concerns to make a great variety of artefacts. Now working mainly with ceramic materials she finds inspiration in her immediate surroundings (dividing her time between bases in the Var, France and Taroudant, Morocco, with occasional trips to the UK). She also works to meet her own domestic needs, or by commission to meet the requirements of others.
Bergman’s intuitive and innovative approach results in fresh, arresting objects. Made to be used or otherwise lived with, these are life-affirming works that lift the human spirit.

MARSDEN WOO GALLERY, 23 Charlotte Road, EC2A 3PB
Shoreditch, London, United Kingdom
MARSDEN WOO GALLERY shows innovative work in the applied arts from internationally recognised artists and talented newcomers. It is one of the largest spaces in London devoted to showing a broad range of applied artforms. Our main gallery is given over to a programme of solo and small group exhibitions featuring new work from gallery artists and specially invited guests. Further extensive collections of important work can be viewed by appointment.